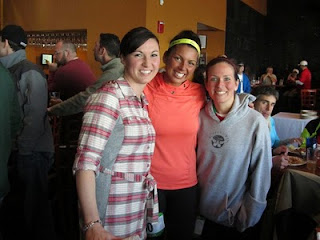 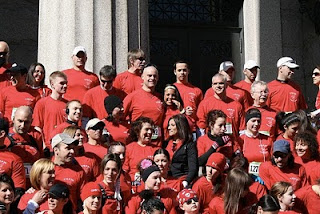 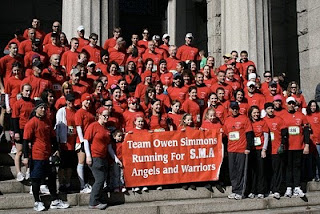 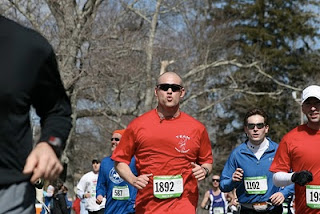 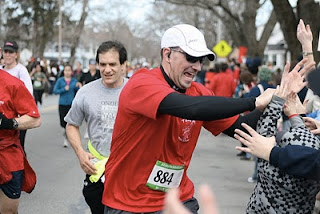 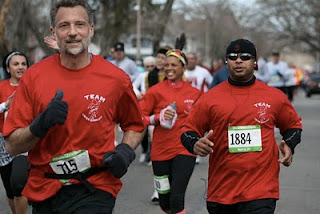 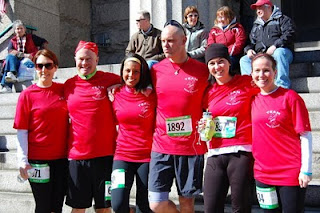 On March 20th, over 100 runners committed to stomping out SMA gathered at the New Bedford Half Marathon. Why were over 100 runners united to run for a disease most had never heard of? They were inspired by a boy(Owen Simmons) and his wonderful family(Andy, Heather, Adyn). Some of these runners were first time runners, others were grizzled(Kenny Rogers, Kevin Mullen lol)veteran marathoners. The one thing that they had in common was committing to raise money and awareness to try and eradicate a terrible disease. It was a wonderful day, and one that New Bedford will not soon forget.

The idea of running the New Bedford Half Marathon on behalf of Owen was a total Team Owen effort. After 100 Miles 4 Owen, myself, Magda, Claudia, Gillian and Heather came up with the idea of running for the little man in our home town signature event. The idea was to try and attract as many runners as possible to run and raise money and awareness for SMA. We decided that we would have T-shirts made and have each runner wear it during the race. The T shirts would be made in Owen's favorite color, red(he loved Elmo) and would have the inscription on the back of the shirt "Running to Find a Cure for SMA, powered by SMA Angels and Warriors." The inscription was designed by Adyn and I have to say he did a fantastic job. Everyone raved about the shirts. We were able to sell over 300 shirts and could have sold 1000 if we had that many. Many runners who pledged to run for team Owen also raised money on their own, whether it was on line or through donations they collected. We did not require Team Members to raise money(only buy a shirt). We wanted to assemble as many runners as possible to run for Owen so we could raise as much awareness as possible. Most do not know what SMA is. Honoring a special boy, raising awareness, and raising money for SMA were are goals and they were all met and exceeded.

On the day of the race we had all team members assemble on the steps of the New Bedford Public Library for a group photo. Admittedly I was extremely nervous about how this whole event would go off. Would the weather cooperate? Would enough runners show up and run the race? How would the after party be? Well as soon as I walked up Purchase St towards the library, I saw a see of red already forming near the library. I knew Team Owen would come through and they did with flying colors. After the pic, runners milled around and there was alot of nervous energy around. This would be the longest distance alot of these runners would run. I tried to reassure most that this day would be special and that you would have the power of SMA Angels behind you. I explained how they had helped me through all my dark moments on the trails and that I knew for a fact that they would be with you this day. The day was perfect for running and we lined up for the start of the race.

As the gun went off all I could see or was drawn to were the run for Owen T shirts. It was truly amazing and I was totally motivated. The race takes you down Purchase St and then towards the first big hill of the course, Hathaway Rd. The race course was lined with spectators, the majority it seemed were screaming for Team Owen. I usually run with headphones but took in the pleasure of the cheers from the crowd. Claudia, Gilly and our young SMA Warriors were stationed at Hathaway Rd with a huge Run for Owen banner as well as other signs. The crowd and the runners were certainly energized by their presence and they helped alot of first time runners trudge up the hill. After Hathaway Rd the course turns down Rockdale Ave for a long 5 mile stretch towards the beaches. It is a fast part of the course plus a part of the course heavy with spectators. As we approached Buttonwood park, all I could see were Team Owen supporters. It was so inspirational hearing Owen's name as we motored along the course.

I would be re missed if I didn't mention my running partner for most of the race. I had just met Matthew Robitaille a month prior when he joined Team Owen. He is friends with Andy and Heather and joined the team to run for Owen. Matt and I were going at a pretty good clip for most of the race(good clip for me 7:30min mile). I asked him what his best time was for the half. Matt said he had only run it once before, last year, and had run that in about 1:55. I looked at him kind of funny and was thinking to myself, "I think Matt has left the reservation." I told Matt that I think we are running about a 1hour40min pace. He looked at me like yeah that's cool. I would like to think that I pushed him during the race but I know it was the power of Team Owen that moved him along. He stayed with me the whole race and ended up shaving 15 minutes off last years time. 15 minutes with minimal training. Sweet.

As we hit the beaches we ran into a bit of a breeze but nothing serious. After making the turn towards Davy's locker, the running conditions were perfect. A light tail wind, sun shining on your face, and the knowledge that there were only about 3 miles left. We turned up County St to the last big hill of the race. I felt really strong and just powered up the hill. The crowds were amazing as we came to the finish. A sea of red everywhere. It felt so good to cross the finish line as a member of Team Owen. As I crossed the finish line, I gave a big hug to Dan McCarthy(personal friend and Race Director of th NB Half). Dan and the Friendly Sons of St Patrick host the race each year and every year they outdo themselves. This year was no different. The race kicked ass.

After finishing, myself and Kenny "the Gambler" Rogers went back on the course to try and boost any runners from team Owen. We came across Heather as she was coming up the dreaded County St hill and she looked in fine form. Heather stated she was a bit tired but was kicking some serious butt. We ran by a raucous crowd at County St/Clinton St and the cheers for Heather were deafening. The goosebumps were in full effect now and it was a short trip to the finish. As we approached the finish, we were joined by the lovely Lauren Runs for Owen(SMA ass kicker emeritus)! It was great running down the home stretch as Heather completed her first half marathon for her lovely son. We all peeled off from Heather as she approached the finish line so she could enjoy the spotlight, which she richly deserved. As she crossed, I know she crossed with a heavy heart but I also know that her heart was filled with joy and love. I also know that Owen was with his mommy and was so proud of her. I was so happy and proud for Heather, along with all the SMA runners who kicked some serious SMA ass.

So many runners of Team Owen ran their best races in their life. Lots of personal records were set and I am a firm believer it was because of those angel wings and the knowledge that they were running for something greater than themselves. They were running for those who cant.

After the race was completed, we ventured over to Cafe Funchal for an after race feast/party. Luis Dasilva from Cafe Funchal was amazing in their hospitality. They provided their beautiful bar area to us. They provided free food and drinks for us. They provided a free band and DJ for us. There generosity was tremendous and will not soon be forgotten. A ton of racers, children, families, and well wishers showed up to celebrate. It was so cool seeing so many kids there. I spoke with several young children who told me they couldn't wait to run for Team Owen. During the race and at the party i spoke with several people who were asking "what is SMA." I was able to explain to them a little about the disease and what we are trying to do about it.

Finally after a few words were said, we watched and incredible video that was made by my friend Greg Demers. The video shows so many SMA babies and their families. Some had earned their angel wings and some were struggling with this ugly disease. It was a poignant reminder that we still have so much work to do. After watching the video we went outside with everybody and released a couple of dozen red and white balloons in honor of Owen. Tears and goosebumps could be seen on many a person as the balloons lofted in the air.

In closing, Owen Simmons has brought so many people together in our community. This day was so special and is a highlight in my life. There are so many people I would like to thank but I am afraid I will leave someone out. I would like to send out a special thanks to Heather, Andy and Adyn for sharing Owen with all of us. I also would like to thank my girlfriend Magda, Claudia and Gillian Sampson for helping me with whatever I needed and for truly being the brains behind the operation. Also thanks to Greg Demers, Jimmy Estrella, Hank Turgeon, Dave Conceicao, Wendy Cordeiro Andre, Matthew Robataille and so many others who raised money and awareness for this special day. The early returns are in and I think when it is all said and done we have raised close to $15000 dollars for the Gwendolyn Strong Foundation. We have only begun folks, we still have more to do and we will continue "to run for those who can't" Stay tuned, Team Owen and the Western States 100 is now in full effect!
Posted by Unknown at 3:57 PM