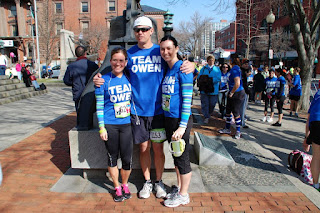 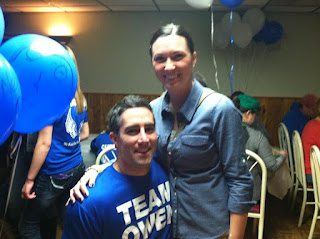 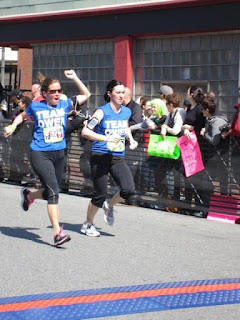 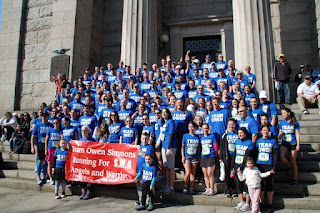 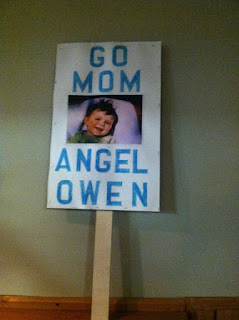 What a day! Team Owen officially owned the streets of New Bedford for the 2012 New Bedford Half Marathon. It was a truly an amazing and special day, chock full of good times and new memories. I couldn't be any happier or more proud of the outpouring of support and effort of so many. I am truly blessed to be surrounded by so many special people. Here is a brief recap of what transpired on this special Sunday.

As Team Owen assembled near the steps of the New Bedford Public Library there were several things that became apparent. First, the weather was going to be perfect. Not a cloud in the sky, bright sunshine and warm conditions. That meant big crowds to come out and cheer all the runners. Secondly, Team Owen had grown from last year. Unofficially I believe we had approx 150 runners for Team Owen this year. We had so many new faces and we have made many new friends. A sea of blue was everywhere and you could tell alot of spectators were watching and saying to themselves, "who is Team Owen."

After taking the Team pictures, we headed to the starting line and started to mingle with other runners. Heather was running her second New Bedford Half in memory of her beautiful boy and was super excited and ready to kick some ass. Her escort for the race would be the lovely Lauren "runs for Owen" Lundy straight from the boogie down Bronx. Heather and Lauren have become best friends, drawn together from this terrible disease, but united in the cause to kick SMA so hard. They are bad mama jamas!

The gun went off and we were on our way through the streets of New Bedford. This years race had a record number of runners(3500) for the race. The streets were crowded with runners and supporters and it was set for a great day. I was not in tip top shape for this run and opted to just relax and enjoy the run, and take in the whole atmosphere. What became apparent very soon in the race were the cheers from the crowds for Team Owen. You could not run 25 yards without someone shouting "go Team Owen." It was amazing. This year we had the T shirts made by my good friend Russell Katerle from Kat Man sports. He did an unbelievable job and the shirts really stood out. All along the run people were asking me about SMA. Who is Owen? What are you guys running for? How could I join the Team next year? How can I help? I was in running bliss. This is what Team Owen was all about. This is why we run and "we run for those who can't." It was great seeing so many Team Members smiling as we paraded through the city.

As I crested the hill of County St(mile 12), the crowds were huge and the cheers for Team Owen were deafening. A big ol cheesy smile was spread across my face. Again the goosebumps were there and stayed with me until the finish line. As I crossed the finish line, I was first met by Dan Macarthy(race director, Friendly sons of St Patrick, supporter of Team Owen and one cool dude.) Dan looked super awesome in his Team Owen apparel. I then waited for other Team members and took in the accomplishments of all the Team Owen members. Everybody was so excited to have run this race on behalf of Owen and were all amazed at the support we received. Lots of endorphins flying around. Heather and Lauren finished super strong and had a great race. Heather was so proud of what her little Angel had accomplished, he has literally changed so many lives. We had at least 150 runners running for Owen, as well as over 400 Team Members who supported the cause. Owen you are one amazing little boy.

After the race, we headed to Knuckle Heads Bar and grill for a little post race celebration. Lots of food, fun, raffles and good times. A great crowd showed up and we had a lot of fun. The band was fantastic! It was great to see so many little kids running around in their Team Owen shirts. That is what it is all about. Paying it forward and showing by example that it is cool to give back and to help others.

I was fortunate enough to win an amazing charcoal sketch of "Tarzan Brown' an amazing Narragansett Indian who was a tremendous runner. The sketch was donated by an amazing artist, co worker and friend, Scott Carola. And as I looked around, there were lots of smiling faces and contented runners. I can't wait until next year, Team Owen is amazing.

There are so many people I would like to thank for all their amazing support. Team Owen is a total team effort and we would not be where we are without everybodys support. First and foremost, thank you to Andrew, Heather and Adyn for being an amazing family and amazing people. Your grace, determination and unselfishness sets the example for all of us to follow. What they have been through and what they continue to do makes me proud to say they are my friends. Thank you to all my friends who supported us, donated or made time for Team Owen. I am surrounded by amazing people and quite frankly I am the person I am because of you. Thank you to Bill, Victoria, and Gwendolyn Strong for all your support and inspiration. What you guys do, how you live, and how you help others continues to amaze us and inspire us. It is an honor to run for the lovely Gwendolyn, a special, special girl! There are not enough superlatives to describe you guys. Last and definitely not least, thank you to the amazing Sampsons(Claudia, Gillian and Ianthe). You guys are the foundation of Team Owen and all this is possible because of your hard work. You guys are always willing to drop what you are doing to help others and often times it goes unrecognized or unappreciated. Believe me, we all appreciate who you are and I am fortunate to have you as friends. You guys kick ass.

Ahhh these are SPECIAL DAYS!
Posted by Unknown at 2:00 PM