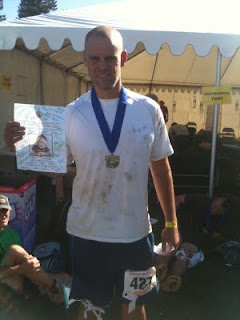 As the Western States 2011 has approached, alot of different things have been going on in my cluttered head(and boy is it cluttered). Last years event was truly a life changing event, a memory that when I'm old, grey, senile and ready for the nursing home, I will be able to reflect back, smile, and say I gave my all. I was able to honor a little boy who has done so much for so many people. Unfortunately Owen never got the chance to even know it. He never got the chance to be, just a little boy. I was also able to meet an amazing family, Victoria and Bill Strong, proud parents of the lovely Gwendolyn. As I corresponded with the Strongs, I immediately got the sense that I was dealing with an amazing family. Like Andy and Heather, they have a child afflicted by this dreaded disease. Also like Andy and Heather, they are a power of example. I saw first hand how devastating this disease is, not only to the little warrior but to the whole family in general. And I saw how Andy and Heather handled it with Owen, and I see how the Strongs deal with SMA. How to conduct yourself in adversity. How to take the high road when the low road would be that much more satisfying. How they are doing everything in their power to come up with a solution to this hideous problem. How SMA families do it, I do not know. I often think to myself, how would I handle this adversity, would I be strong enough, would I have enough grace under pressure? I dont think I'm that strong a person.

As the race has drawn a bit closer I have got a bit more excited. The excitement however was nothing like last years run up to the race. I was just beside myself in anticipation last year. I don't know what it was, maybe just because it wasn't a new experience. Not that I think I'm an old 100 mile veteran, I'm just trying to quantify why I was feeling the way I was. When I had surgery in April I was really hoping I would be ready but internally I was at peace if I couldn't run. As I healed from the surgery I was fairly certain that I would be able to run and again I got slightly excited. May rolled into early June and I started thinking more and more of the race. Then Victoria posted a blog and it gave me pause. Victoria talks about how unrelenting this disease is to Gwendolyn and the family as a whole. How it is totally consuming and its like they can't even catch their breath for a minute. Every SMA family feels this pain. I was choked up. Well anyways, I thought to myself, "this is why we run, we run for those who can't." Why I am doing this? Obviously there are selfish reasons, I'm able to do something that I love to do and do something that not alot of people are able to do. But the real reason that I'm able to do this is because i was given a gift of inspiration. And I can't forget that! I have to give back and give everything I got! So it was time to get pumped for this gift of running Western States once again and boy I am.

Before I left yesterday I made sure that I grabbed my sheet of paper with the that lovely smiling face of Owen and all the names of SMA Angels who are no longer with us. And I'm mad as hell because sadly there are more names to add. There is more work to be done and its time to do more. I'm mad as hell because on a daily basis another child or family has to deal with SMA. 100 Miles 4 Owen has started a small fire that is growing. Friends who have never run before are now running for those who cant. Endless messages of support and encouragement are flowing in as well as the generous donations! The message of ending SMA is being spread but we need to do more. Its time for everybody to do a little more so some of the pain that is felt can be eased a bit and so no other families have to endure this hardship. Thats why I'm mad as hell!

So yeah for the last 10 days or so I've been super excited and motivated. Like truly motivated to do the best that I can. I can't wait to get out there and lay it on the line. And this year's edition of the Western States looks like it may be a bit more difficult conditions wise. The course has been altered due to huge amounts of snow(8ft snow pack) in Robisnon flat. So it looks like snow up to about mile 34 plus as an added bonus it is 100 degrees in Sacramento right now. Forecast for Auburn this weekend looks to be in the low 90's which will make the Canyons a bit toasty. And you know what, I cant wait. Again I will have my SMA angels with me carrying me through the day.

This year's crew will have a bit different feel to it this year. The lovely Magda will once again bring me in from mile 93 across No hands Bridge. Again Magda has been a huge help, and inspiration. She is always going the extra mile for all that are in need and is so selfless! Thanks again Magda for all you have done! My main man Kenny "The Gambler" Rogers was unable to make it this year, so Kevin "the Mullenator" is stepping into the breach. He is going to do awesome and I am looking forward to hitting Foresthills with him. It's going to be epic!

PS Please go to GwendolynStrong.com and check out what Im talking about
Posted by Unknown at 10:34 AM