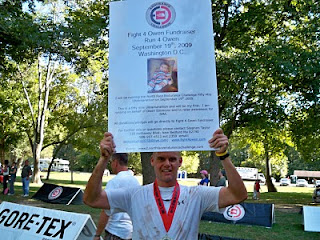 Hello..My name is Stephen Taylor and I am from New Bedford Massachusetts. I am fortunate and grateful to have been bitten by the Ultrarunning bug. I completed my first 50 mile Ultra in September of 2009(North Face Endurance Challenge) and I am looking forward to participating in the 2010 Western States 100 Ultramarathon, ws100.com. The Western States 100 takes place this June 26th and starts at Squaw Valley Ca., and meanders 100 miles through the Sierra Nevada mountains. It is hot, it has over 40000 feet of elevation and descent, and I can't wait to torture myself.
This wouldn't be possible without one special person entering my life. A little guardian angel. It is said that god puts special people in your life when you least expect it and that he works through these people. My little guardian angel is Owen Simmons. Owen is the son of Andrew and Heather Simmons and has a brother, Adyn. Sadly, Owen passed away this November at the age of 23 months. Owen was diagnosed with SMA(Spinal Muscular Atrophy). SMA is a terrible disease which effects thousands of infants and their families.
Even though I only met Owen a few times in my life, his impact on me is immeasurable. What he and his family went through taught me some things to remember as a I go on with my life. To be less self-centered, to give of one-self. To have courage and strength, when you think you can't summon any. To have a grateful heart, and to fill that heart with the love of family and friends. I have so many things to be thankful for in my life and I look forward to honoring little Owen whenever I can. I want to especially thank Andy and Heather for sharing Owen with all of us. They are the epitome of class, strength, dignity and grace. To learn more about Owen's story, please go to fight4Owen.com
I am raising money and awareness to kick SMA's butt. All money raised will go to the Gwendolyn Strong Foundation. The GSF is an unbelievable foundation run by Victoria and Bill Strong, the parents of Gwendolyn Strong. Gwendolyn is a beautiful young girl with SMA. I am really looking forward to having another guardian angel following me around and I can't wait to run for Gwendolyn. I strongly encourage you to check out their blog and website and see what an amazing family they are. To donate go to firstgiving.com/gsf We will be having t-shirts, sweatshirts, and will be having a dinner/fundraiser on June 3rd. More info to follow. If you have any questions or suggestions feel free to contact me. stephen.taylor5@comcast.net
GSF website: http://GwendolynStrongFoundation.org
Blog of Gwendolyn's life http://GwendolynStrong.com
Support SMA research: http://PetitionToCureSMA.com
Posted by Unknown at 11:56 AM